New renderings have been released showing what visitors can expect at the Albright-Knox Art Gallery‘s upcoming AK360 expansion in Buffalo, New York.

The first upgrade to the museum since 1962 is expected to double exhibition space. It will also provide unobstructed views of Frederick Law Olmsted’s surrounding Delaware Park, a new underground parking ramp and a dedicated wing for education.

There has been a largely positive response to the plans, says Albright-Knox deputy director Joe Martin Lin-Hill: “So far as returning green space by burying the parking lot, that was very well received. From what I heard, people really appreciated the homage to the 1905 and 1962 buildings. That’s one part of our new exhibition space. The second part of new exhibition space is underground”.

OMA principal and design architect Shohei Shigematsu and his team conducted an exhaustive concept and programming design phase. The south façade of the 1905 building and the north façade of the 1962 building will be encased within a luminous architectural shell and connected by a new welcome hall that also reconnects the park and the city through public museum space. The park gallery will have north and south-facing light wells to allow the landscape to spill into the space. 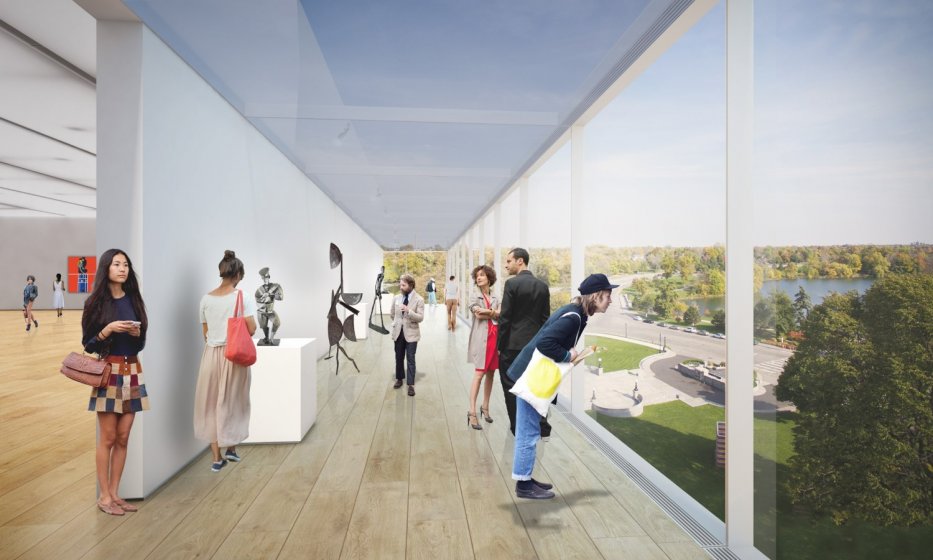 After making public the the renderings you see here, the next step is to complete the schematic design, which should be complete by November. Currently there is an outline, but the schematic will “bring colour and life to that outline.”

Lin-Hill says the total budget for the expansion is now $155 million, including $30 million for the operating endowment. The cost has steadily risen from $80 million announced earlier last year.

“A preliminary budget was set, but it was only based on comparable museum construction and ambitions we had early on in the process,” explains the museum’s deputy director. “We added more gallery space than we had initially conceived and, for the first time now, we actually have an accurate cost estimate from professional cost estimators who are accustomed to these types of projects.”