ECA continues its series of attraction market profiles with an overview and insights on the greater Pearl River Delta (PRD) region in Southern China and theme park attraction development. ECA is currently working on multiple theme park destination developments in China including the PRD region.

China, with an increasingly large urban population (now at nearly 55%) and improving income profile due to strong economic growth, is a major market for theme park development in the medium to long term, in particular in the PRD.

As the first region to open up economically in China, the PRD is one of the largest and most advanced regions in the country.  Situated at the Pearl River estuary where the river enters the South China Sea, the PRD region comprises 9 municipalities in the Guangdong Province, including Guangzhou, Shenzhen, Foshan, Zhuhai, Zhaoqing, Dongguan, Huizhou, Zhongshan and Jiangmen, as well as two special administrative regions (SARs) Hong Kong and Macau.

Shenzhen is a popular domestic tourism destination in China with the earliest development of theme parks in Mainland China. Hong Kong is the top destination for Chinese outbound tourists since the introduction of the Individual Visitor Scheme (IVS) in 2003 following SARS as a way to boost the economy of Hong Kong. Macau has experienced major growth since the opening up of the gaming industry in 2002 to international operators and in recent years focus on tourism product diversification.

With a reported 57 million residents in the region in 2012 (almost 65 million including Hong Kong and Macau), the PRD accounts for over half of the 106 million residents in Guangdong Province, forming one of the most populous urban areas in China and in the world. It is also a powerhouse of China’s economic growth with an average annual GDP growth of close to 16% over the past decade. Shenzhen has the highest per capita disposable income levels among urban households in China, followed by Shanghai, while Guangzhou is third. The large resident market base of PRD, along with a strong and growing income profile, provide a good basis for theme park and attraction development in the region. The gross resident market would need to be income qualified for higher headline ticket theme parks in the range of 60-85% (not including Hong Kong and Macau) depending on specific project, pricing and visitor per capita spending.

In addition to a large resident market base, PRD is also an established regional tourism market, with Guangzhou, Shenzhen, Zhuhai, Hong Kong, and Macau as the major destination cities in the region. Aside from the increasing income profiles in the region, strong investment and improvement in the PRD infrastructure and transportation networks also contributed to the rapid growth in regional tourism, leading to heavy cross-traffic between the cities. The five markets have experienced an estimated average annual tourism growth rate of 8-10% between 2000 and 2012 (including overlap between resident/tourist traffic and multi-destination visits).

Mainland visitors are key drivers of tourism in the PRD, accounting for nearly three-quarters of the total visitors received.

According to official government estimates (which include considerable overlap between resident/tourist traffic and multi-destination visits), Guangzhou has the strongest overnight tourist market among the 5 cities with more than 48 million overnight visitors in 2012, followed by Shenzhen with 41.5 million.  Zhuhai received a reported 16 million overnight visitors in the same year, with robust growth expected to continue as Macau and Hengqin Island are being further developed as tourist destinations.  Hong Kong and Macau also reported strong overnight visitation at 23.8 million and 13.6 million, with the majority being Mainland China tourists (additional high day-trip visitation to both cities). The vast super-regional PRD tourism market is supported by more than 195, 000+ star-rated hotel room inventory across the five cities (in addition to significant non-star accommodations, guest houses/inns).

Based on ECA’s work in the region, the tourism overlap factor can range from 40-50% +/- of the official combined numbers depending on specific city/location and market definition. In other words, the total combined 143 million overnight tourists, after market overlap and income qualification adjustments for likely attraction visitors, would be in the range of 70-85 +/- million tourists.

As one of the leading economic and tourism regions in China, the transportation infrastructure in the PRD region is highly developed, providing excellent access within the region as well as rest of China through roads, rail and airports and Hong Kong/Macau.  It has an extensive road network of close to 60, 000 kilometers of highways in operation as of 2012 that offers direct and convenient access within the region and to major cities in China. It is also a major hub for railway transportation, interconnecting by several High Speed Rail (HSR) and Inter-City rail lines including the Wuhan-Guangzhou HSR, Guangzhou-Shenzhen-Hong Kong HSR as well as Guangzhou-Zhuhai Intercity Railway.  The region is currently served by 5 major airports including the Hong Kong International Airport, Macau International Airport, Guangzhou Baiyun International Airport, the new Shenzhen Bao’an International Airport and Zhuhai Jinwan Airport, with a total planned annual capacity of 200+ million passengers up to 2020.

The growth of the region will be further bolstered by several major infrastructure projects that are currently under construction. The Hong Kong-Zhuhai-Macau Bridge will connect the three cities directly by road, reducing driving time from Hong Kong to Zhuhai from over two hours to 30 minutes. Other major infrastructure project includes expansion of the Guangzhou-Zhuhai Intercity Railway, which will extend to reach Zhuhai Airport and Hengqin Island, an up-and-coming tourism resort area, as well as the Hong Kong segment of the Guangzhou-Shenzhen-Hong Kong High Speed Rail that will terminate in the heart of Hong Kong at West Kowloon (TST). All these projects that are currently expected to be completed by 2016 will significantly improve connectivity between Guangdong Province, Hong Kong, and Macau, further facilitate the movement of residents and tourists, and provide a strong foundation for the continual development of attraction industry in the region.

With a large population and tourism base, as well as close proximity between several major cities, the PRD is well-positioned to become a major, extended multi-theme park destination cluster, alongside the other established international theme park hubs, including Southern California, Central Florida and the up-and-coming Southern Malaysia/Singapore region. As the ‘birthplace’ of the modern Chinese theme park industry with Ocean Park in Hong Kong and subsequently the multiple parks in Shenzhen by OCT (Overseas Chinese Town Group), the PRD is currently home to 9 major theme parks with a combined theme park attendance of 30 +/- million visitors, allocated among three broader regional sub-markets:

Ocean Park, opened in 1977, is the first major theme park in the region. The marine life based theme park was developed with support from the Hong Kong Government, and is now run by a financially independent, non-profit organization. It is currently in the final stage of a major 7-year upgrade and redevelopment plan, which include the addition of multiple on-site hotels and a year-round water park that will open in 2017.

In 1989, 1992, and 1994, respectively, OCT Group opened Splendid China, China Folk Cultural Villages, and Window of the World in Shenzhen, the earliest theme park development in Southern China following its economic reform in 1980s. These are generally more passive, scenic, and cultural theme parks with shows/live performances and festivals. In 1998, OCT opened the first of its own branded regional theme park, Happy Valley, in Shenzhen, featuring thrill rides and shows, which is now rolled out in five other major cities across China. Happy Valley Shenzhen has since undergone four phases of major upgrades and expansions.

In 1997, the privately-owned Chimelong Group opened the first major animal-oriented theme park in Guangzhou, Panyu Safari Park. It is an international-standard safari park that features wild animals as well as other animal areas and shows. This was followed by Chimelong Paradise Amusement Park in 2006 and Chimelong Water Park in 2007, which has become the top performing water park in China with over 2 million annual visitors.

Hong Kong Disneyland opened in 2005 as the first internationally-branded destination theme park in the Chinese territories. It is a joint venture between the Walt Disney Company and the Hong Kong Government. The park is currently in its second phase of expansion following the addition of three main themed areas in the last three years, and a third phase of expansion is under consideration.

ECA expects the PRD market to experience a continued rapid phase of growth in the short to medium term (next 5-7+ years).

Existing theme parks in the region, such as Ocean Park and Hong Kong Disneyland are growing through major expansions, redevelopment, and repositioning that are already underway helping to expand the market. Selected major new development pipeline and expansions that are coming to the aforementioned 3 submarkets in the region include:

In addition to the existing theme parks, the PRD is expected to add several major theme parks, particularly with the emergence of a fourth sub-market Macau/Hengqin Island (Zhuhai), spearheaded by the opening of Chimelong’s Ocean Kingdom in early 2014 (Jan/Feb). Ocean Kingdom is the anchor attraction of the Zhuhai Chimelong Ocean Resort Area. It is a major marine-based theme park with eight themed areas that feature animal exhibits, performances, thrill rides, and other entertainment components. An 1, 888-room Hengqin Bay Hotel is built alongside the anchor theme park in the first phase of the project at a reported investment overall of RMB 10 billion (US$1.6 billion). Additional theme parks (second and third gates), attractions, and water parks are planned in later phases, as well as hotels, convention centers, shopping centers, golf courses, and other amenities with a reported total investment of over RMB 20 billion for the entire project (US$3.2 billion). In addition to Chimelong Ocean Kingdom theme park, other international theme parks are currently exploring the potential of new theme parks in the Hengqin Island/Zhuhai area and PRD region, as well as multiple large-scale integrated resorts with entertainment and indoor themed attractions (both paid and free) proposed over the next two to five years in Macau.

Despite the large number of existing parks, the PRD theme park market is still in its growth phase compared to the established multi-theme park destination markets of Southern California and Central Florida, and has significant room for growth and expansion. With a large population and strong tourism market base, growing income profile, and improving infrastructure, we foresee excess market demand in the PRD region to warrant the addition of several international standard theme parks. These theme parks should provide unique positioning and concepts (potential intellectual properties / brands), to further leverage the PRD region as a premier multi-theme park hub cluster in China.

Images from the top: 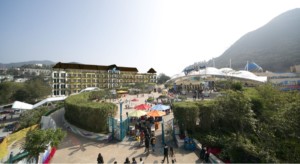