Nobody puts on a nighttime extravaganza quite like Disney. The Walt Disney World resort near Orlando, Florida is getting ready to up the ante with even more nighttime entertainment that will keep bombs bursting in air late into the evening.

The new light-up-the-night shows join a lineup of nighttime spectaculars that include:

Disney World puts on nearly 2,000 nighttime entertainment spectaculars per year which means there are always fireworks filling the night sky over the 40-square-mile resort. That’s in addition to the nearly 200,000 shows, parades, special events and other live performances produced at Disney World annually.

The new “Wonderful World of Animation” laser light and projection show debuts May 1 at Disney’s Hollywood Studios as part of the theme park’s 30th anniversary celebration.

The nighttime projection show uses state-of-the-art lighting technology to paint moving images on the park’s version of Grauman’s Chinese Theatre. The show will also include lasers, special effects and fireworks accents. The story takes viewers on a panoramic visual journey through more than 90 years of Disney animation.

“It tugs at the heartstrings from romance to adventure,” said Coble during an interview at Disney Hollywood Studios.

Every Disney and Pixar animated film 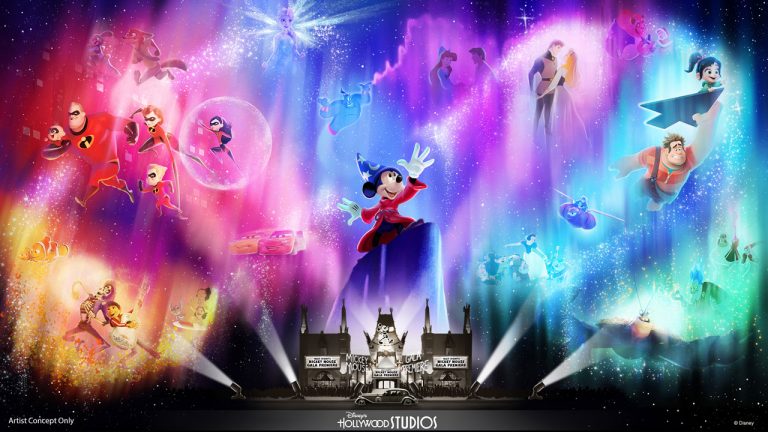 In the concept art, Sorcerer Mickey stands atop a cliff in his red robe and pointy moon-and-star blue hat at the centre of the action. Using a mix of magic and his imagination, Mickey then brings movie scenes to life from a host of animated films.

The movies span the history of Disney and Pixar animation, including:

In addition to those movies, the 12-minute show will include nods to every feature animated film ever released by Disney and Pixar, according to Coble.

“It is a feat,” said Coble, who serves as managing producer on the new show.

“A new soundtrack is about to be recorded for “Wonderful World of Animation,” Coble said. The hope is to then add new Disney and Pixar films to the projection show as they are released into theatres, he said.

“We’re going to stay relevant with this production,” Coble said. “We can insert new content as we go along so it’s always fresh.”

“Wonderful World of Animation” won’t replace the current “Disney Movie Magic” or “Star Wars: A Galactic Spectacular.” In fact, depending on park hours, all three shows could play each night.

The new Tree of Life “Awakenings” projection show paying tribute to the 25th anniversary of “The Lion King” debuts in late May at Disney’s Animal Kingdom. The man-made sculpted Tree of Life serves as the iconic centrepiece of the park. More than 300 detailed animal carvings — including a lion, monkey, bear, rhinoceros and hippopotamus — cover the 50-foot-wide trunk and outstretched branches.

The nightly Awakenings shows turn the 145-foot-tall Tree of Life into a storytelling canvas painted with state-of-the-art lighting technology. Throughout the show, animated images are projected onto the leaves and trunk of the massive tree.

“Magical things emerge from within the tree,” Slater said. “The animals that you see on the tree come to life. Consequently, it gives the appearance that this just happens; that this comes out of nature.”

Four nighttime “Awakenings” shows currently play on the Tree of Life. “Gift Giver” tells the story of a fox who delivers presents throughout the forest to other animals. Another show celebrates a hummingbird love story. Other shows touch on tales from “Avatar,” “Finding Nemo,” “Pocahontas” and “Jungle Book.”

The new “Awakenings: Lion King” show on the Tree of Life will feature animated animals, thematic imagery and an original musical score inspired by the Academy Award-winning 1994 animated film. “You’ll see visual highlights of Simba’s journey,” Slater said. “All of those moments from being born and presented to going off to live with Timon and Pumba to finding Nala again and taking his rightful place as the king. All of those little beats will play out visually.”

The “Awakenings: Lion King” show is part of a Disney marketing push tied to the July 19 theatrical release of the CGI live-action remake of the original movie. Disney’s Animal Kingdom is also home to the “Festival of the Lion King” in-the-round show and the new “Hakuna Matata Time” dance party. “‘Lion King’ has been part of the DNA of the park since it opened,” Slater said. “The movie came out in 1994 and we opened Disney’s Animal Kingdom in 1998. It was a huge influence on getting the place built.”

Two new nighttime entertainment spectaculars are headed to the World Showcase Lagoon once Epcot retires its original “Illuminations” show after a 20-year run.

The original “Illuminations: Reflections of Earth” will close in fall 2019. The show debuted in 1999 as part of Disney World’s millennium celebration.

“Reflections of Earth” tells the story of our planet’s fiery birth, the history of humanity and mankind’s remarkable achievements. The massive show employs towering fireworks, 60-foot-tall bursts of flames and in addition a 175-ton globe peacefully floating across the Epcot lagoon.

The new “Epcot Forever” nighttime entertainment spectacular begins a limited-time run immediately after the original “Illuminations” takes a farewell bow in the fall. “Epcot Forever” celebrates the 37-year history of the park with fireworks, lasers and lighting effects set to a soundtrack of familiar Epcot songs.

“We’re going to look back a little bit. We’re going to celebrate in the moment and we’re going to advance to the future of Epcot,” Coble said of the new “Epcot Forever” nighttime spectacular.

The show will include special effects-enabled kites capable of airborne choreography – a first for an Epcot nighttime entertainment show. The illuminated kites will be controlled by two-man teams aboard Jet Ski-like personal watercraft. The show will employ eight of the Jet Skis, with a driver and kite performer aboard each personal watercraft. The movement of the Jet Skis will also create the wind required to keep the kites aloft.

Music for the new show will feature songs from former and current Epcot attractions. “Epcot Forever” is expected to include the song “One Little Spark” from the Journey into Imagination attraction. It will also include “Magic Journeys” from the 3D film of the same name. In addition, the soundtrack for the pyrotechnic show is now in production, Coble said.

“The pyro is the star,” said Coble, who serves as managing producer on the new show. “We need to make sure the music we’re creating will complement the payoff that our guests will be seeing.” A new Illuminations show set to debut in 2020 will celebrate how Disney music inspires people around the globe. The fireworks and laser show will feature massive floating set pieces, LED panels and choreographed fountain displays.

Slater says the as-yet-unnamed 2020 show will raise the bar for Disney spectaculars. It will also answer the tantalising question: “What can we do to really blow people away?”

“This next show that we’re bringing on as part of this overall transformation at Epcot that’s going on is really on a massive scale like we’ve never done,” Slater said of the 2020 show. “Just immense floating set pieces, fireworks, LED panels that are huge, other special effects and lasers. The big, floating set pieces will also have fountains on board that do different choreographed things. It’s amazing.”