Readers of USA TODAY have voted to choose the 10Best amusement parks, water parks, and theme park hotels, restaurants and entertainment across the US.

Nominees for all the categories are chosen by a panel of travel experts, theme park industry experts and editors from USA TODAY. Four weeks of online voting then took place before the announcement of the best-loved attractions.

Six Flags brought in a haul with nine of the company’s parks and coasters making the Top Ten. Six Flags Magic Mountain in LA won Best Amusement Park for the second time and Superman: the Ride scored Best Roller Coaster in the USA.

“We are extremely honoured by this incredible show of support by our fans, who appreciate our track record of offering the most innovative rides and most thrilling park experiences in the industry,” said Tom Iven, Senior Vice President of US Park Operations,. “Our mission is to keep pushing the limits and deliver exciting new rides and attractions in every park, every year.”

“For roller coaster lovers, it doesn’t get much better than Six Flags Magic Mountain,” said USA TODAY. The park boasts a massive 19 coasters, including record-breakers. The New Revolution Galactic Attack is the first giant looping mixed reality roller coaster in the world. Twisted Colossus is the world’s longest hybrid coaster. CraZanity is set to debut here this year.

Six Flags recently announced its intention to acquire more US parks and became the largest waterpark operator in North America in May this year.

The high-energy Celtic-inspired show at Busch Gardens Williamsburg proved hugely popular. “It will have you laughing and clapping to the beat of festive music,” says USA TODAY. Native Irish animals play their part and the fun is ramped up with audience participation.

Togetherness, storytelling and family, are the key themes at Dollywood’s DreamMore Resort and Spa. The hotel is a relaxing place, set in the Smoky Mountains of Tennessee just minutes from the theme park. There’s an interactive splash pad, a zero-entry pool and guests can enjoy door-to-door transportation to the park.

Aunt Granny’s restaurant presents a massive all-you-can eat offering at Pigeon Forge. Comfort food features large, with everything from chicken and dumplings, to a taco bar and steaks. However there is also a great salad bar and other healthy options. The restaurant opens before Dollywood does, for resort-goers in search of a swift and hearty breakfast. 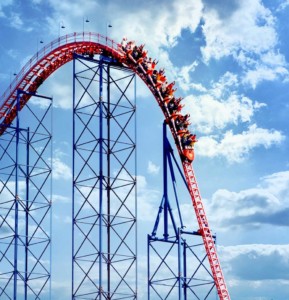 The 5,400-foot steel hypercoaster at Six Flags New England boasts a 221-foot drop and reaches speeds of up to 77 miles per hour along its twisting red track.

Aquatopia at Camelback Resort in the Poconos covers 125,000 square feet and features seven pools (including a wave pool), 13 slides, an adventure river alongside a water play with close to 100 gadgets and interactive elements. Storm Chaser is one of the longest indoor, uphill water coasters in the USA.