Hello and welcome to my world. I am Sam Gennawey, an urban planner by training, a passionate historian, and a theme park geek who finally gets to make a living in this industry. So why am I here? What do I know? Maybe a little background might help.

You could say I am on my third career. Yeah, I am that old. I spent just over 25 years in the music industry. I owned an award-winning record store and then ran a label distributed by MCA. Since my office was on the Universal Studios backlot, I became fascinated by the place. Then it was off to Chicago to join Alligator Records to help keep the Blues tradition alive.

Next came a job in marketing and promotion for Mercury/PolyGram. For those old enough to remember, I had the same job as Artie Fufkin in Spinal Tap.

Tired of the travel, I crossed over to the broadcasting side and lead the marketing effort for Chicago’s number one alternative rock radio station. After attending a radio convention, it hit me that I was already one of the oldest people there (in my mid-thirties) and maybe I should look for an exit. I wanted to become a historian.

So how do you make money as a historian? You don’t. But, I played a lot of Sim City. So, I became an urban planner. You try and piece it together. As result, for the past 17 years I have worked on over 170 projects and have conducted more than 1,000 community workshops. My projects have ranged to the revitalization of a neighborhood to the vision statement for the largest county in the Continental United States.

But along the way I became fascinated to learn how theme parks operate because of their influence on urban design. Planners who copied theme parks tended to create places that were clean, efficient, and lifeless. Why?

That interest lead to my first book, Walt Disney and the Promise of Progress City. I applied my professional training to identify the DNA of the Disney parks. I was fortunate to have Harrison “Buzz” Price as a mentor and he helped me through Walt’s vision for EPCOT, and Ron Miller helped me to understand Walt’s dream for his Mineral King ski resort.

The success of that book garnered me a contract to do a couple more. My best-selling book has been The Disneyland Story: The Unofficial Guide to the Evolution of Walt Disney’s Dream. I quickly realized that the world did not need another Disneyland history book, but after a conversation with Diane Disney Miller, I realized that a biography of the park was necessary, and I drafted the most annotated history of the park to date.

Next came Universal versus Disney: The Unofficial Guide to American Theme Parks Greatest Rivalry. I had been interested to learn more about Universal City since I worked on the lot. This is the first time that I am aware of that somebody documented the rich history of that theme park chain.

Most recently, I published 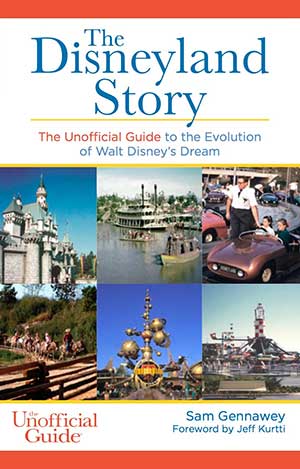 JayBangs: How Jay Stein, MCA & Universal Invented the Modern Theme Park and Beat Disney at its own Game. The book dives into the MCA culture that created the only true rival to Disney. Walt Disney may have invented the theme park industry but it would be Jay Stein who ultimately pointed the way forward. Now the Universal formula is what others are following. Today, I work for The Goddard Group dealing with what is next and I love it.

My hope for this column is to try to make you pause and reflect. Sometimes the story may be a history lesson to provide context for what we are seeing today. Sometimes I will celebrate the individuals or one of the many technical disciplines that are necessary to make the magic we all love to experience. Sometimes I will just go on a rant about what I am seeing to peel back the public layer and dig into the truth.

I also hope that sometimes I will be able to share a story that you have brought to my attention. I am actively seeking out leads.

So, write to me at sam.gennawey@goddardgge.com. I want to hear from you.