On August 29th, Six Flags announced every new addition coming to its theme parks across North America for the 2020 season. Similar to Cedar Fair’s announcement two weeks ago, Six Flags may have surprised quite a few people with its upcoming additions.

Based on the announcement, there seems to be a strong focus on waterpark additions rather than new roller coasters. There is also a healthy dose of new flat rides. After years of not adding flat rides to the mix, it is very interesting to see Six Flags invest so heavily in them this season with half a dozen new purchases from Zamperla. There will be five new flat rides; 2 Discovery, 2 Endeavours and 1 Super Air Race, plus the purchase of a new Spinning Mouse Coaster. 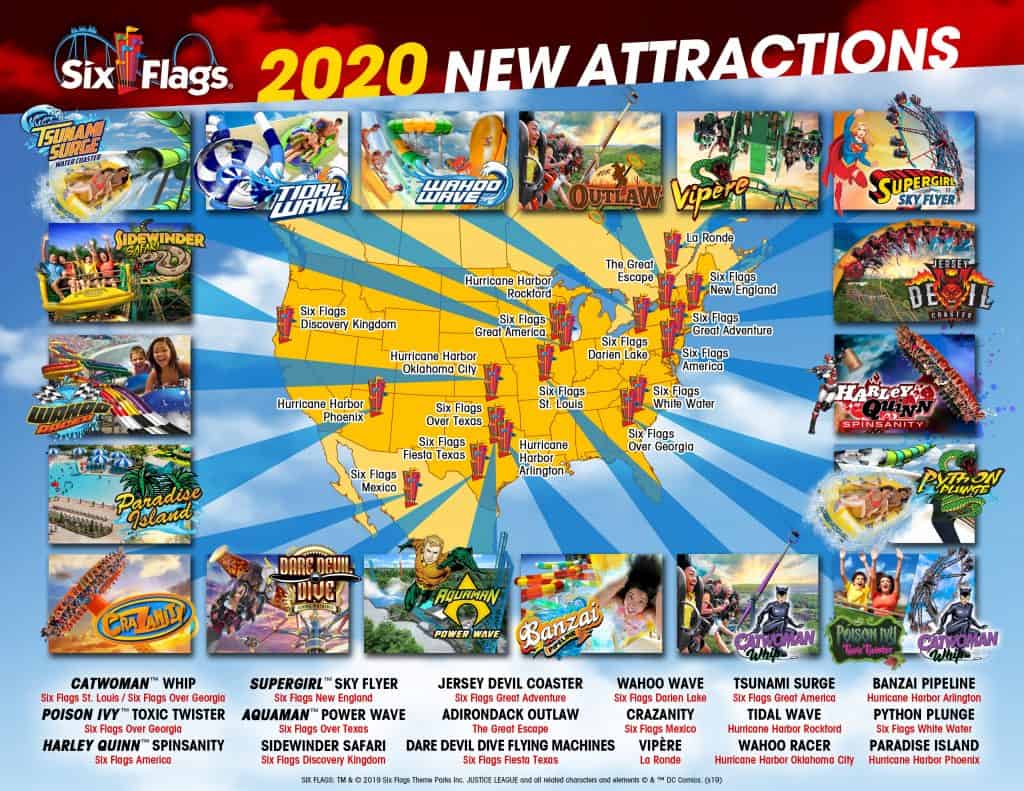 As previously mentioned, the coaster front is a little dry looking. The Six Flags 2020 line-up includes the purchase of a medium-sized coaster from Rocky Mountain Construction, and a custom new layout featuring RMC’s single rail Raptor coaster system going to Six Flags Great Adventure as the Jersey Devil. There is also the Zamperla Spinning Mouse going to Six Flags Discovery Kingdom. Additionally, the former Green Lantern: First Flight (Intamin Zacspin) coaster will be relocated to Canada. It will be installed at La Ronde as Vipere next year.

Beyond this, Six Flags is also purchasing its first-ever Mack Rides Power Splash water coaster. This will be going to Six Flags Over Texas as Aquaman Power Wave. After all, the Mack Power Splash is more of a shuttle coaster style ride experience that has a splash-down finale. This is a welcome addition for many, as it seems too many parks in North America have been retiring their water rides and not buying replacements. So seeing this new creation come to North America is indeed a pleasant surprise in my book.

Standing out in the Six Flags 2020 line-up for me, however, is a staggering seven new waterpark additions. Some of this shouldn’t come as a surprise. The chain has been re-branding and adding new small waterparks to their portfolio over the past year.

With Cedar Fair and Six Flags both going very light on adding new roller coasters in 2020, following a fairly light 2019 season, it does make me wonder if we have seen the end of the ‘coaster war’ era, where the chains would go all out to build the biggest and fastest new creations. SeaWorld Entertainment is adding major new roller coasters at all five of its major properties in 2020. Yet so far the year has only seen 15 new roller coasters confirmed for North America. This is an area which normally sees about 30-40 added each year.