The concept of park-wide Halloween themed events as a way to drive incremental attendance has become a key event for theme park operators.  The revenue generated by extending the season well beyond the summer continues to increase in popularity and is producing amazing thrills for operators bottom-line.

Traditionally, theme parks closed their gates on Labor Day but that started to change when Knott’s Berry Farm put on a three-day event dubbed “Scary Farm” in 1973.  From that humble start of one weekend, a couple of mazes and a handful of roaming monsters, these Halloween events have grown in popularity and are now a global phenomena in the attractions industry, generating some very scary profits.

Today, many parks host events that can run from early September and conclude at the beginning of November.  These events enable park operators to not only extend their operating season, but leverages their fixed cost and available capacity while providing a diversified product offering to single-day guests and season-pass base, their most profitable guests.

Americans spend more on Halloween than any other holiday after Christmas, with spending on scary merchandise estimated to be more than $7 billion according to the NRF.  In fact, more than two-thirds of Americans buy Halloween costumes.  In other appetites for fright, over 17 million viewers tuned in to AMC’s “The Walking Dead” season 5 premier to witness life after a zombie apocalypse.  So Halloween and horror experiences continue to grow in popularity and smart theme park operators are tapping into consumer demand.

After Knott’s pioneered the scare event concept, it was 16 years later in 1989 that Six Flags got into the act and “Fright Fest” was launched at Six Flags Over Texas.  The event now extends to each of their parks.  In 1997, Universal Studios Hollywood launched their “Halloween Horror Night” and charged $32 to scare you.  This past year one had to pay $77 for the pleasure or more if you opted for the VIP experience.

Disney started to offer a family oriented “Mickey’s Halloween Treat” in 1995, which eventually morphed into “Mickey's Not-So-Scary-Halloween Party” and the focus of the event is on the Halloween tradition of collecting candy over being scared with gory themes.

The Halloween season now accounts for as much as 20 percent of annual attendance at US theme parks and has become critical to the operator’s financial performance.

It’s not just a North American phenomenon for theme parks to stage Halloween events.  Parques Reunidos’ 2014 Halloween event drew more than 600, 000 guests to their parks in Spain.  This represented a 4.5% increase over the previous year.  Movie Park Germany has been putting on a Halloween event for 16 years.  Events are also held at the company parks in Italy, Belgium and Norway.  The event in at US Singapore is rated within the top ten by “Theme Park Insider” and has help popularize the holiday in Singapore.

Halloween and haunted attractions are also growing in popularity across Asia and in China in particular.

'The content of such an attraction in China needs to promote a "harmonious society" due to Government censorship, nessessarily making the attraction developer's role a litle more delicate with the focus being on delivery of a more conservative scare experience.

Quan Gan, MD at Darklight and who ran Shanghai Nightmares in the city explains. "When we produced our haunted house, our spin on it was that this was a thrilling event that promotes the togetherness of friends, similar to friends going to a theme park with roller coasters – you get excited and scared and entertained.  In Chinese, we didn't even call ourselves a "haunted house" but a "thrilling and mysterious house".  The word "haunted" is the same as "ghost" or "monster", and that wouldn't necessarily have looked good on paper when we asked for government permission."

Ocean Park Hong Kong’s Halloween event is probably Asia’s largest Halloween themed event and one of the most anticipated seasonal festivities in Hong Kong. Again the emphasis is on a family experience. Ms. Vivian Lee, Ocean Park’s Director of Marketing says, “more and more people look to the Halloween event for fun elements for the family”.

What do parks do?

The typical format for Halloween events is that parks open on Friday, Saturday and Sundays.  During the day they offer their typical program but then close early before reopening with the park transformed for the Halloween theme.  Even season pass holders need to pay for the special event but often at a discounted rate – still more revenue from an established base.

Operators put on a creepy immersive show.  In the case of Knott’s “Scary Farm”, over a thousand seasonal workers are deployed as clowns, werewolves, and monsters. Live shows, rides and attractions are overlaid with ghoulish themes.  Mazes and “scary” zones are created and fog machines complete the eerie environment.  Operators like Universal and Parques Reunidos taps into popular IP like “The Walking Dead” to expose their guests to familiar stories.

As attendance and revenue have soared, so has the investment in creative and financial resources for the Halloween season.  Parks report that up to 20% of their annual budget is spent on creating the best Halloween experience and out due their competition.

With new technology the business of fright can be delivered very cost effectively.  Operators with interactive media-based dark rides like Cedar Fair’s Canada’s Wonderland switch their daytime story of “Wonder Mountain’s Guardian” and guest fighting mythical creatures to recover King Adelsten’s crown to a night-time dark and creepy zombie blasting adventure called “Zombies 4D”.  The same asset turns into a completely different ride with a simple thematic overlay.  This capability has made the business case for Cedar Fair to plan dark rides for all their parks.  They see media-based rides as a strategic competitive asset especially during the highly profitable Halloween season.

House of Nightmares, which opened at Sweden's Gröna Lund park this Spring was preceeded by a marketing campaign which began with a zombie scare prank inside a cinema followed by a House of Nightmares commercial so horrifying it was banned from airing before 9pm!

"Before guests even step inside we want them to be nervous, anxious and ready for anything”, says lead designer, Drew Hunter of Sally Corportation.  The visitor will experiece an, "undercurrent of dread, suspense, fear and anticipation.”

The continued growth of the business of both Halloween and the broader haunt/scare market is reflected in the annual trade shows catering to this specific market but also by the number of vendor companies developing and growing their own businesses with Halloween very much in mind.

Polley highlight's Universal Orlando's Halloween Horror Nights, Busch Gardens Tampa's Howl-O-Scream and Knott's Scary Farm as personal favourites but for him Halloween Horror Nights stands out. "I think they pour themselves into the detail of the attractions like nobody else.  For me, the immersive environments are what really make the event second to none."

The ability for seasonal parks to stay open later in the year is huge on profitability given the high fixed costs associated with operating an attraction.  Almost all of the total cost of running an amusement park is fixed cost – the money spent on administration, buying roller coasters, hiring staff, marketing expenses, food and beverage, taxes and paying for the electricity to power the park.  These are operator’s greatest expenses and a longer season creates economy of scale and profitability.

So Halloween is lucrative and even more so for parks that can charge extra for the nightly events.  Disney charges $72 a night for “Mickey’s Not-So-Scary Halloween” and Universal Studios Orlando is charging upwards of $49 for their “Halloween Horror Night”.  With an estimate of more than a million visitors to the Universal Studios event and in-park spending you can quickly understand the importance for revenue generation.

For operators it is particularly important for the season-pass base since it remarkets venues and attracts many teens who bring friends to the parks and that pushes up ticket revenue.

So horror will continue to be good business for operators and these events will continue to get longer with some venues opening their events on Labor Day – think Christmas carols in October.  The events will get more elaborate has the impact on profitability continues in importance. Operators will continue to out do the competition in key markets like central Florida, southern California and emerging markets in Asia.  Operators will invest in attractions that support their business model like interactive dark rides.  Their ability to provide seasonal content “on the flick of a switch” will increase in importance to operators wanting to maximize assets and profitability for Halloween.

2015 is looking like a perfect year for theme park operators.  Gas prices are down so consumers are more inclined to drive to theme parks and with the improving economy have more discretionary spending capabilities once they are there.  A solid Halloween attraction will send attendance number and profitability to the next level.  So its scary  good! 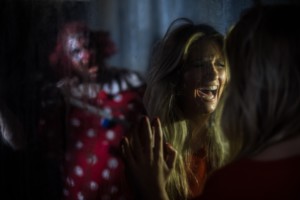