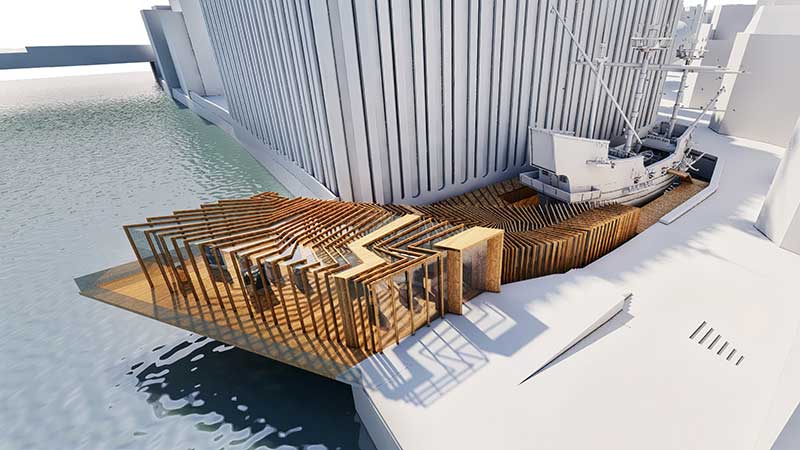 London based architectural firm SPPARC has revealed its eyecatching cantilevered designs for a Golden Hinde Visitor Centre and Museum.

The design, which references the structure and craftsmanship of Drake’s ship, The Golden Hind, comprises a two-level building covering 1,125 square metres, with a covered walkway that wraps around the galleon’s full-size, seaworthy replica, with galleries allowing an all-round view.

In a report by Dezeen, Trevor Morriss, principal of SPPARC, said: “The brief for the new Golden Hinde visitor centre called for a unique design that learnt from the skilled craftsmanship and innovative nautical engineering of this iconic ship. The concept was derived through the desire to reflect this history of The Golden Hinde and Sir Frances Drake in a contemporary visitor centre.”

Partly cantilevered over the Thames, the new building will afford an improved view of the replica ship, named the Golden Hinde, which contains pieces of the original Golden Hind. Launched in 1973, the Golden Hinde is currently being refurbished at St Mary Overie Dock, its home since 1996.

The upper level will be made up of the entrance and ticket hall, leading into an exhibition space and an education area, cantilevered over the Thames.

Downstairs, artefacts related to Drake and his journeys will be on show.

Construction of the museum will be of the same oak slats used for the galleon’s refurbishment, with a glass lining lending a contemporary edge.

The project furthers the Port of London Authority’s 2035 Thames Vision to bring “community and culture” to the river’s banks, and will follow Grimshaw Architects’ Cutty Sark exhibition hall in Greenwich, and the museum designed by Wilkinson Eyre Architects housing 16th Century Tudor warship, the Mary Rose.

SPPARC, who expect to submit their proposal for the museum and visitor centre for planning later this year, hope the Golden Hinde Museum will allow visitors to see locations along the Thames that have a connection to Drake, such as his home near Cannon Street, and the site where the original galleon was moored near Custom House.