CAP.Co, a leader in the design and build of adventure play attractions, has unveiled its latest project, a new wilderness adventure play area for Castle Howard, in North Yorkshire, UK.

CAP.Co is proud to showcase Skelf Island, the brand new play area at Castle Howard. This country house is a popular visitor attraction, located near the city of York in the UK. The Baroque Grade I listed building dates back to 1699 and took 100 years to complete. It has been home to the Howard family for over 300 years and sits within more than 1,000 acres of gardens.

These large and beautiful grounds include ancient woodland, varied topography and both large and small waterways. It is a haven for wildlife with stunning views over the Great Lake, home to swans, oystercatchers, kingfishers, turtle doves and more. The estate also features follies, temples and monuments. 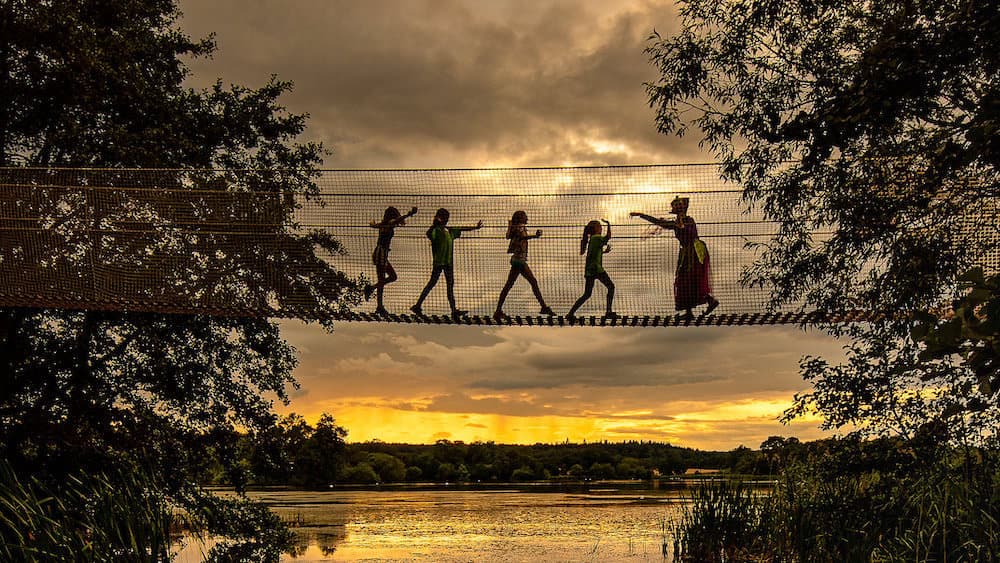 Building on story and place

CAP.Co was challenged to create a new play area to replace the existing attraction, with the aim of designing a family destination. The company wanted to focus on the story of the place, as well as the variety of wildlife that calls it home. During preliminary site visits, a perfect location was discovered –  what appeared to be a separate island.

This ‘island’ was in fact part of the same woodland, curved around the waters’ edge, with a small water inlet separating the two banks on the edge of the Great Lake. An ideal home for a play area with an immersive, natural environment. Further inspiration was taken from the nests of the local birdlife.

The design connects the nests with free-standing structures and walkways supported by natural timber poles, whilst being careful not to disturb existing natural habitats. CAP.Co also learned the history of the land across from the Great Lake. This is the Medieval site of Henderskelfe. This inspired the invention of ‘Skelves’ – the creatures who inhabit this lakeside island. Nest-like play structures form the heart of the new play area. From the outside, these structures resemble the very nests that can be seen within the grounds. Ground nests along with Dome nests and Cup nests each form the basis of inspiration for individual structures.

Inside these nests, the design is inspired by the follies and monuments in Castle Howard’s grounds. They feature physical and sensory play: ladders, climbing nets, tunnels and crawl spaces. These elements add excitement and opportunities for play. There are also windows, peepholes and speaking tubes to encourage imagination. The nest structures are also connected by raised walkways, bridges and tunnels.

Visitors access the new adventure play area via a 50m span wooden suspension bridge. This stretches across the waterway and into the woodland beyond. A low-level boardwalk also offers an alternative route into the play area for those unable or unwilling to cross the suspended jungle bridge. Castle Howard worked with Steve Pearce to create a range of characters who live on the adventure play ‘island’. The Medieval settlement of Henderskelfe inspired these Skelves, who, the story goes, have lived on the island since that time.

Before the opening of Skelf Island, Castle Howard worked with a ‘Skelf Council’. This was formed by children from the local community, who helped with planning the launch and got involved in workshops. This laid the groundwork for long term engagement with the community and gave local children an insight (and a sneak preview) of this the new play area.

CAP.Co says, “Legend has it that Skelves have been inhabiting this secret world across the Great Lake of Castle Howard for centuries. They are said to cause mischief and mayhem high up in the trees, they are friends with the birds and protectors of the local wildlife. Let us know if you catch a glimpse of them!”

Another new adventure playground from CAP.Co opened in March 2019, in Scotland. The Sky Maze is part of a £500,000 investment in Fort Douglas adventure park at Dalkeith Country Park.