ListenTALK allows users to overcome the difficulties that distance, background noise and hearing loss can present when it comes to communication. Now, thanks to the launch of ListenTALK 2.0, interpreters will be able to easily listen to audio in one language and speak the words in another language. In addition to this, the system also now allows three people to speak at once.

“Listen Technologies has been delivering exceptional audio experiences and helping people engage with one another in challenging hearing environments for more than two decades,” says Maile Keone, president of Listen Technologies. “The next generation ListenTALK system makes it easier for venues and interpreters to break down language barriers and foster inclusion.”

ListenTALK is also ideal for communication post-COVD, as users can communicate easily while keeping to safe social distancing guidelines. They simply have to wear a small transceiver on a neck lanyard, which is accompanied by either the venue’s headset with a microphone or their own headphones or earbuds a built-in mic. Users can then speak to either the leader or the whole group at the touch of a button.

Now, with ListenTALK 2.0, interpreters can receive messages in their headset through one unit, and use another hand-free to communicate the translation to their audience. Those listening can also ask questions of the interpreter with the push-to-talk feature.

In addition to this, the system can also support relay, or two deep interpretation, where one interpreter translates the main presenter and then a second interpreter can translate that into their own group’s preferred language.

“With ListenTALK, listeners who do not understand the language of the presenter are not excluded from understanding what is said and sharing in the experience,” says Sam Nord, vice president of global sales at Listen Technologies.

“Whether interpreters provide whispered, consecutive, liaison, simultaneous, or relay interpretation, we’ve made it easy to use ListenTALK and facilitate communication between groups that do not speak the same language.”

The newest version of the ListenTALK solution features the same excellent sound quality and simplicity that users are accustomed to. They units are easy to set up and group and the software also allows attractions to easily name groups by language.

In North America and Japan, up to 20 simultaneous groups can be created in the same place, while in Europe this rises to 30 groups.

As well as helping venues to keep a safe distance between people post-COVID, the units are also easy to sanitise between uses.

The new update will be available from 5 April 2021. 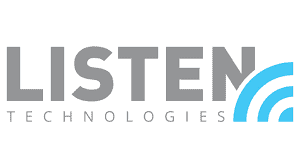