The attractions industry's biggest annual trade show and conference, the IAAPA Expo in Orlando, run by The International Association of Amusement Parks and Attractions (IAAPA) took place in mid-November and was judged a huge success by the organisers.

Serving professionals working in the $24 billion global attractions industry, covering theme parks, museums, zoos waterparks and other visitor attractions, the annual event is the biggest of its kind.

This year's show, held November 18 to 22 saw over nearly 30, 000 industry professionals, including 18, 000 buyers on the trade show floor and the biggest exhibition in a decade.

Alongside the trade show were the education sessions. These were well organised and comprehensive, covering topics as wide ranging as zipline innovation,  admission fraud and retail analytics. With whole days set aside for museum, zoo

and waterpark professionals they provided an invaluable resource for delegates, a great opportunity to learn from experienced attractions professionals.

In an informative blog well worth checking out,  JRA's Shawn McCoy shares his impressions of Disney's innovations featured in presentations at IAAPA.  MyMagic+ is set to lead the way into a new era of guest interactivity.  George A. Kalogridis, President of the Walt Disney Resort said of Disney's ground breaking technology application,  “MyMagic+ gives Disney an ability to increase customer satisfaction more than anything we’ve ever done.”  (image left Disney)

Blooloop's Charles Read was one of the table hosts for the Social Media Roundtable session. Others included Dollywood's Pete Owens and Brian Angelo,  Debbie Vanskike of San Antonio Zoo,  Six Flags' Mark Kupferman and James Geiser and Kennywood's Jeff Filicko.  Chaired by Ocean Park Hong Kong's Marketing Director, Vivian Lee, It was a packed and lively session, with each group of 6 to 10 delegates rotating through the 10 tables. A table's host addressed his or her own specific  question – ours was, "Should we be Human on Social Media?" – and, with the huge variety of delegates in attendance it made for a spirited and thought provoking session.

IAAPA week is of course not only about the show floor and the education sessions. It also represents a unique networking opportunity for the thousands of attendees, for many of whom it is the major event of the year.  Each evening saw many parties and functions, a number of formal occasions organised by IAAPA itself but also many others organised by exhibiting companies or other trade associations. We made the parties of Electrosonic, Nassal , accesso and Gateway Ticketing plus the annual BRC Imagination Arts dinner.

Electrosonic's party at Universal Studios included a chance to enjoy the awe inspiring new(ish) Transformers ride, and of course to meet Optimus and Bumblebee (right). This media based attraction and dark ride was a memorable experience, the real life sets and digital imagary seamlessly blended and the narrative and ride experience so smooth that we were astonished to learn, after numerous rides, that the car went up and down a lift at a couple of points during the experience.

On the Tuesday night we held our own function at Tommy Bahama's in Pointe Orlando. Kindly supported by LCI Productions, Polin Waterparks, Picsolve and Simworx, it was great opportunity to relax after the first busy day on the show floor and meet many old friends and make new ones. The whole evening went really well and the time disappeared as quickly as the mango chicken lollipops and coconut shrimp.

We'd like to thank everyone who attended and our sponsors for a fantastic evening.  A photo gallery of the night is here.

From the Show Floor

With such a huge event it is impossible to see and hear everything, but here are our highlights. (Please check out our gallery of  images from the show floor here.)

FireChaser Express “invites families to become heros” and is aimed at a younger audience to create a rollercoaster experience that the whole family can enjoy.  Themed as a fire engine the ride takes families on a thrilling chase to fight fires in the Great Smokey Mountains.

Built by Gerstlauer, the FireChaser Express will open to the public on March 21st 2014 and has enough thrills to satify older members of the family as well as being accessible for under 5s, including a dual launch, forwards and backwards motion and 6 points of air time with just a 39 inch height requirement.

Introducing the ride, Herschend CEO Joel Manby noted that the FireChaser Express is just part of the ten year $300 million investment programme in Dollywood which includes the 300 room DreamMore Resort, set to open in 2015.

Polin hosted the European Waterpark Association (EWA) at their booth and later at the Blooloop party.  The EWA are shown below looking at a waterpark model based on the much anticipated Cartoon Network Amazone themed waterpark set to open in Thailand in 2014.

Also during IAAPA, Polin signed an agreement to provide ten slides for the Delta Leisure Resorts waterpark in Nigeria.  The development is set for an April 2015 opening and includes hotels, a wildlife park and entertainment in addition to the waterpark.

S&S Power and U.S. Thrill Rides showed their Polercoaster – a tower with a looping coaster track wrapped around it.  Plans were announced to build the wold's tallest roller coaster (520 ft) in Florida in 2016.

Popular on the show floor was Zero Shock's Free Fall Stunt Jump.  Throughout the show carefree volunteers could be seen hurling themselves from the 20 ft tower onto the stunt air bag.

Integrating waterslides and video games in an exciting new concept, WhiteWater have added a game console to the slide mat or raft  and sensors, lights and music to the interior of the water slide.

Slideboarding enables watersliding gamers to play as individuals or as a team, gliding over sensors or using the console in time with the lights like in the popular Guitar Hero video game.  The Slideboarding game gets progressively harder as players skills improve.  Players can play against themselves, their friends and also others via a leader board.

Mack Rides showed the Drop N Splash – a shuttle coaster with a splash – with a particularly nice working model.

ProSlide returned to IAAPA with an impressively large booth to house their array of awards.  ProSlide President Rick Hunter here shows us the latest in his collection – IAAPA's 2013 Best New Water Ride Award for the HydroMAGNETIC (HM) TORNADO which debuted at Yas Waterworld Abu Dhabi in early 2013.

Always with a popular booth at IAAPA, Cruden were exhibiting their latest ride, a powerboat simulator.

We like the new Water Journeys™ product from Vortex.  With children's entertainment is increasingly focussed on the high tech, this modular ground play structure has a running stream meandering through it offering plenty of opportunities for more traditional water play outdoors.

An impressive sight at any show – Zamperla's Air Race provided some thrills.

Horror seems to be an ongoing growth area.  Here was one of the more stomach churning exhibits:

As usual there were a number of animatronic models around at IAAPA but we particularly liked this Irritator from Dinosaurs Unearthed.

Blooloop's booth was fortuitously situated next to Selma's Cookies.  The free samples provided a much needed boost to our blood sugar mid afternoon and after extensive testing Blooloop can recommend the peanut butter and chocolate cookies.  See you next year ladies! 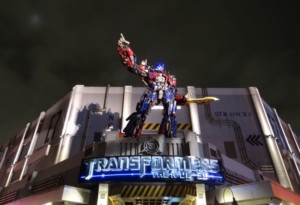