Kaisun is launching the Belt and Road eSports Festival at Splendid China theme park in Shenzhen.

The massive growth in eSports continues as Asian Games’ event Clash Royale kicks off in Shenzhen and GIRLGAMER returns, this time in Portugal.

Clash Royale will take place on 15th June at OCT’s Splendid China Chinese Folk Culture Village theme park in Shenzhen. The event will be the start of the Belt and Road eSports Festival. Organisers, the Kaisun Energy Group Ltd., believes there is huge development potential for eSports in Belt and Road countries.  Kaisun also see potential for synergies in using theme parks as partner venues. 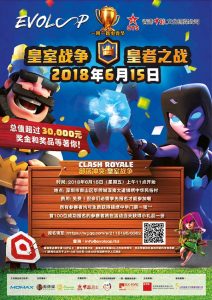 The Belt and Road initiative is believed to be possibly the largest ever infrastructure project – around a trillion dollars will be invested in it across the globe. The aim is to create what China has described as a ‘modern Silk Road’ trading route. The project includes pipelines and a port in Pakistan, railways in Russia and bridges in Bangladesh. The ‘road’ part of the equation is actually a sea route linking the southern coast of China to east Africa and the Mediterranean. The ‘belt’ comprises a series of overland routes connecting China with Europe, via Central Asia and the Middle East.

The popularity of eSports has grown exponentially in recent years, with Southeast Asia is clearly the fastest-growing region in the industry. There are more than 9.5 million fans across Southeast Asia and that number is expected to double by 2019. Esports is also set to become a competitive sport as it becomes one of the events at the Asian Games, held in Jakarta this August.

This will be the first occasion on which eSports will be officially recognised at international level. It will also be the first time that it will be seen as a sports event in Maritime Silk Road countries.

“Our event obtained full support from the official partners of the 18th Asian Games, and renowned international sports brand 361,” says Kaisun in a statement. “Through combining eSport with Belt and Road, three Hong Kong listed companies cooperate and utilize each of their competencies so as to achieve a win-win outcome for all.

E-sports held in Theme Park will bring synergistic effect, and a new business model of cooperation

“This is our first E-sports event cooperating with China Travel, as we view that E-sports held in Theme Park will bring synergistic effect, and a new business model of cooperation.” 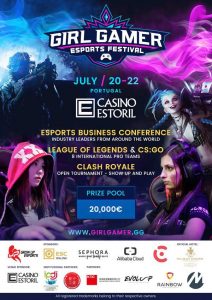 The aim of GIRLGAMER is to celebrate and support women’s inclusion in competitive gaming and eSports. The first festival was held last year in Macau, China. It was broadcast worldwide and attracted over 1.4 million views online. Telmo Silva, SEO of Grow uP eSports, who organised the event in partnership with Kaisun, The Rainbow, Evoloop and Metta Sport, said “Esports competitions should be universal and inclusive. However the female representation in the professional eSports scene is still very low. Therefore, as a way to develop and motivate women’s competitiveness, we have created GIRLGAMER.”

This year the second Festival will be held in July in Lisbon, Portugal. The event will include Counter-Strike: Global Offensive; League of Legends and Clash Royale. Prizes will reach around 20,000 euros. The event will be supported by The Rainbow, Casino Estoril, Sephora, Alibaba Cloud, Logitech G, ESG Online, Portugal Sports and Youth Association and the Portuguese-Chinese Business Association.

eSports is showing huge growth, with the opening of more eSports theatres to fuel the growth in this latest type of LBE.  Tencent is looking to develop a domestic RMB 100 billion ($14.6bn) esports business.  The five-year plan includes a network of electronic gaming centres/theme parks that will be built across China.