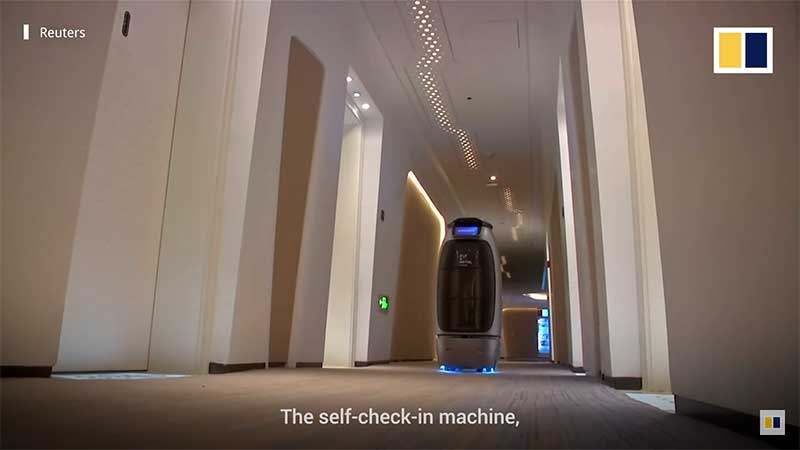 The 290-room hotel opened to the public last month. It will act as an incubator for technology Alibaba intends to sell to the hotel industry in the future.

The robots cut the hotel’s cost of human labor and eliminates the need for guests to interact with others.

It is also an experiment that tests consumer comfort levels with unmanned commerce in China – a country where intrusive data-sharing technology is readily tolerated and often met with enthusiasm.

Andy Wang, CEO of Alibaba Future Hotel Management, said: “It’s all about the efficiency of the service and the consistency of service, because the robots are not disturbed by human moods. Sometimes, we say we are not in the mood, but the system and the robot will always be in the mood.”

The hotel also features face-scanning to check in or use the elevator.

The Henn na chain of hotels in Japan, famed for its robot staff, will cull half the bots as they cause more work for human staff.

Following complaints from staff and customers, over half of the robots will now be removed. The Wall Street Journal reported that the robots were creating work rather than reducing it.

One staff member was quotes in the WSJ, saying: “it’s easier now that we’re not being frequently called by guests to help with problems with the robots.”

A robot assistant called ‘Churi’ will be removed from every room after it failed to answer guest enquires. One guest even reported a robot in his room was triggered by his snoring, and kept waking him up.

accesso partners with Cuseum to transform the digital experience