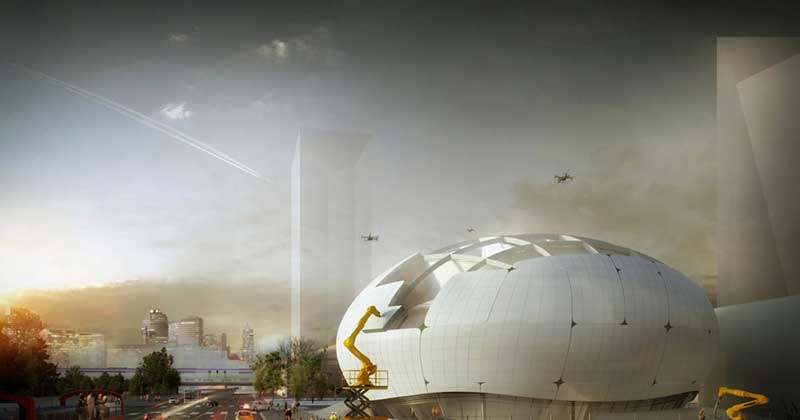 Plans have been unveiled for a Robot Science Museum, built by robots, as technology becomes increasingly integral in creating unique and memorable visitor experiences.

The attraction in Seoul, South Korea, from Melike Altınışık Architects, will be constructed using robotic construction techniques and drones.

Robots will be used to build the curving, spherical metal facade, while other parts of the structure will be moulded, welded, assembled and polished by bots.

The robots will also be used to 3D-print the concrete landscaping around the museum, and drones will be utilised for mapping, site inspections and to control robotic construction vehicles.

“[It] is not only going to exhibit robots but actually from the design, manufacturing to construction and services robots will be in charge,” said architect and MAA founder Melike Altınışık (via Dezeen).

“In other words, the Robot Science Museum will start its first exhibition with its own construction by robots on site.”

MAA added that using robots will save time and money on the project, commissioned by the Seoul Metropolitan Government to educate the public on robotics.

As part of the renovation of the Chang-dong area of Seoul, the museum is one of many being assembled.

Construction exhibitions will begin in 2020, and the finished Robot Science Museum is scheduled to open in 2022.

Elsewhere, a new patent application filed by Disney has hinted at a breakthrough in their “Stuntronics” programme which could see robots performing acrobatic stunts.

At the beginning of 2018, some tech analysts made the bold claim that it would be “the year of the bot”.

More than 4,500 exhibitors displayed the latest tech at the CES show in Vegas. The future they are predicting is a world where we all welcome companion bots into our home.

Although the bot population hasn’t quite exploded yet, Blooloop has predicted 6 attraction technology trends as ones to watch in 2019 – find out more about bots, voice activation and AI here.