The Middle East is home to a diverse cluster of theme parks and water parks. The majority of these are located in Abu Dhabi, Dubai, and other emirates. SeaWorld Abu Dhabi is also set to complete in 2022 on Yas Island, home to myriad unique parks.

Saudi Arabia is currently creating a host of attractions in order to diversify the economy and reduce reliance on oil. However, the country’s existing parks are slightly smaller than the world-class attractions on our list. New developments include Six Flags Qiddiya and an ‘extreme park’ on an oil rig called The Rig.

Due to the hot and dry climate, many Middle East parks offer water-based entertainment. Keep reading for our selection of the top theme parks and water parks in the Middle East, from Ferrari World Abu Dhabi and Motiongate Dubai to Yas Waterworld Abu Dhabi and Atlantis Aquaventure. Attractions include the Formula Rossa, the world’s fastest roller coaster, and Flying Aces, a dynamic coaster with one of the tallest loops in the world. Owned by Miral and operated by Farah Experiences, Ferrari World Abu Dhabi is joined on Yas Island by Yas Waterworld Abu Dhabi and Warner Bros. World Abu Dhabi.

“Our driving experience at the park is perhaps the most popular. Where else in the world can you get to drive a Ferrari? It’s a bespoke attraction, for us, and that’s where our guest experience starts to differentiate itself. You can’t do these things anywhere else.” Spread across 37 acres on Yas Island, Yas Waterworld Abu Dhabi offers more than 40 rides, slides and experiences at various thrill levels. Designed to celebrate the UAE’s pearl-diving past, the water park features the world’s largest surfable sheet wave, as well as the region’s first and only 5D water adventure.

“At Yas Waterworld, there are always new experiences to discover, and exciting adventures to be lived. We are excited to introduce this first-of-its-kind adventure in the UAE that is guaranteed to deliver unforgettable guest experiences,” said Ryan Watkins, general manager at Yas Waterworld.

“We strive to cater each experience to fit our guests’ interests and look forward to welcoming water park fans to try out the all-new underwater VR experience!” 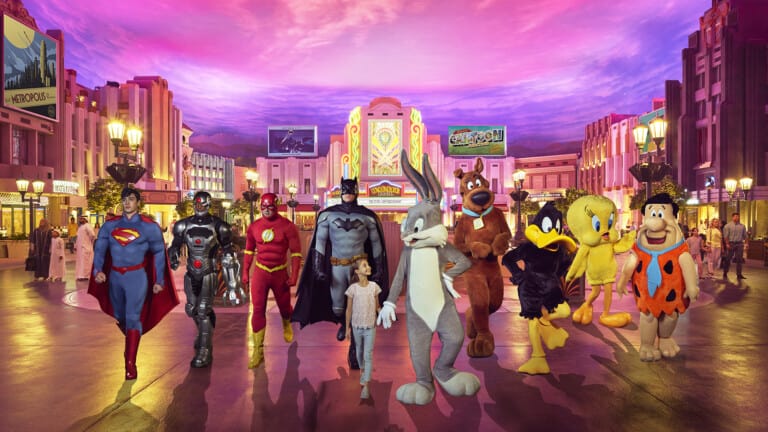 Next on our list of the top theme parks in the Middle East is the world’s first Warner Bros. branded indoor theme park, Warner Bros, World Abu Dhabi.

The park can be found on Yas Island in Abu Dhabi. Home to 29 exhilarating rides, family-friendly attractions and live entertainment, it covers 1.65 million square feet and boasts six immersive lands, as well as shopping and dining experiences.

According to the Guinness Book of Records, Warner Bros. World Abu Dhabi is the world’s largest indoor theme park. Opened in 2018, it brings to life DC superheroes such as Superman and Batman, as well as animation characters like Bugs Bunny and Scooby-Doo. Global Village, a multicultural festival park in Dubai, celebrated its 25th anniversary this year. Home to culture, shopping, dining and entertainment, the attraction offers more than 150 street food outlets and 26 shopping pavilions. It also includes the Carnaval funfair, which features games and attractions.

“Global Village is a truly unique and world-leading entertainment concept, offering guests the opportunity to experience the culture and diversity of more than 78 countries in a single location. Due to the immense scale of our operations, and the various subsystems involved, we are often presented with distinct business challenges,” said Bader Anwahi, CEO at Global Village. 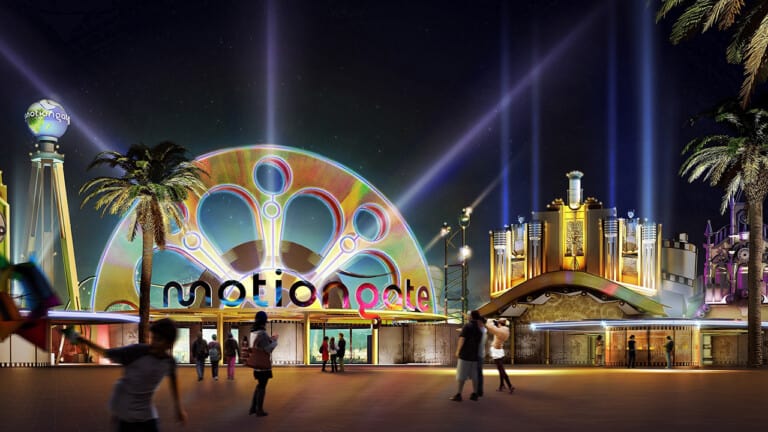 Also on our list of the top theme parks in the Middle East is Motiongate Dubai, the flagship theme park at Dubai Parks and Resorts, which also offers Legoland Dubai, Legoland Water Park and Bollywood Parks Dubai.

The theme park’s Lionsgate zone is expanding with the addition of two new coasters inspired by John Wick and Now You See Me.

“This exciting expansion makes the Lionsgate Zone at Motiongate Dubai the epicentre of immersive blockbuster thrills in the region,” said Lionsgate EVP and head of global LBE, Jenefer Brown. “For the first time ever, it will offer fans the opportunity to experience the poetic action of John Wick and masterful misdirection of Now You See Me through exhilarating coaster experiences.” “In line with our stated hotel strategy to deliver over 1,300 hotel rooms to the destination, we are getting ready to open the region’s first Legoland Hotel,” said Mohamed Almulla, CEO of DXB Entertainments.

“This will complete our 360-degree Legoland Dubai Resort offering, with the hotel complementing the existing Legoland Dubai theme park and Legoland Water Park.” 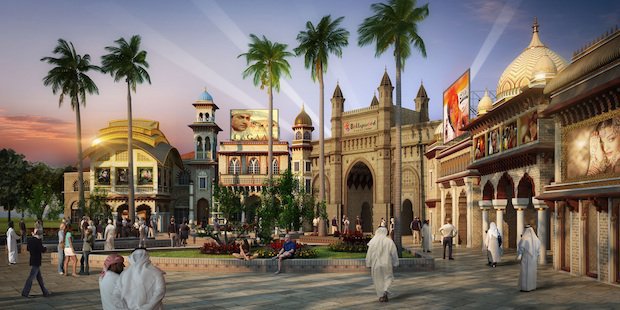 Opened in 2016 at Dubai Parks and Resorts, Bollywood Parks Dubai is the first theme park of its kind in the world, and one of the top theme parks in the Middle East. The attraction’s six themed zones house immersive environments inspired by Bollywood blockbusters. Operator DXB Entertainments previously revealed plans to open 10 new rides at Bollywood Parks Dubai.

“We are currently in the process of rolling out many exciting surprises with the launch of our new rides and the reopening of our theme parks,” said Mohamed Almulla, CEO of DXB Entertainments. “We are working closely with our partners to promote Dubai Parks and Resorts as a preferred family staycation destination.”

“During the closure of operations from March to September 2020, we have focused on the enhancement plan which includes the addition of 10 new rides in Bollywood Parks Dubai and two new rides in Motiongate Dubai,” he added. Aquaventure at Atlantis the Palm in Dubai opened on Dubai’s Palm Jumeirah back in 2008. The world’s largest water park boasts 79 exhilarating slides and water rides, and is one of three Atlantis Aquaventure attractions in the Bahamas, China and the UAE.

ProSlide Technology provided 17 new water slides for phase three of the recent Atlantis Aquaventure expansion. “The water rides ProSlide installed are second-to-none and are the perfect complement for our vision for Atlantis to be among the world’s best water parks,” said Sascha Triemer, VP of marine and water park at Atlantis, Dubai.

“Their technology, innovation, and creative design have brought Atlantis to a completely new and higher level in the destination industry that could not have been achieved with any other water ride manufacturer,” Triemer added. 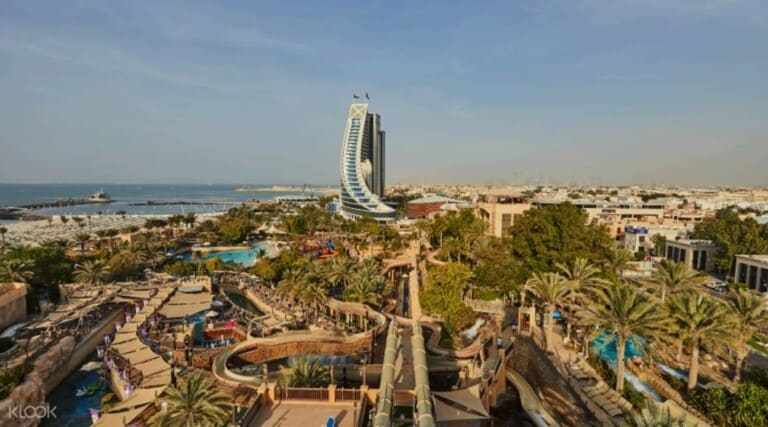 Located in Dubai, overlooking the Burj Al Arab, Wild Wadi Waterpark is an outdoor water park with 30 rides and attractions. Opened in 1998, and now firmly on the list of the top theme parks in the Middle East, Wild Wadi is operated by Jumeirah.

Back in 2017, it was reported that Wild Wadi was relocating to Marsa Al Arab. However, Jumeirah is yet to release further information. Owned by IMG Group, IMG Worlds of Adventure is a vast indoor theme park that covers four zones, which include Cartoon Network and Marvel lands.

IMG Boulevard and the Lost Valley – Dinosaur Adventure are original concepts created by the group. Launched in 2016, IMG Worlds of Adventure was the world’s largest indoor theme park until Warner Bros. World Abu Dhabi opened in 2018. The park covers an area in excess of 1.5 million square feet, and is home to roller coasters, thrill rides and themed attractions.

Lennard Otto, CEO at IMG Worlds of Adventure, previously spoke to blooloop about the use of cutting-edge technology at attractions in the Middle East. “UAE parks are pretty much all new,” he said. “The parks are all using the latest technology in their attractions.” 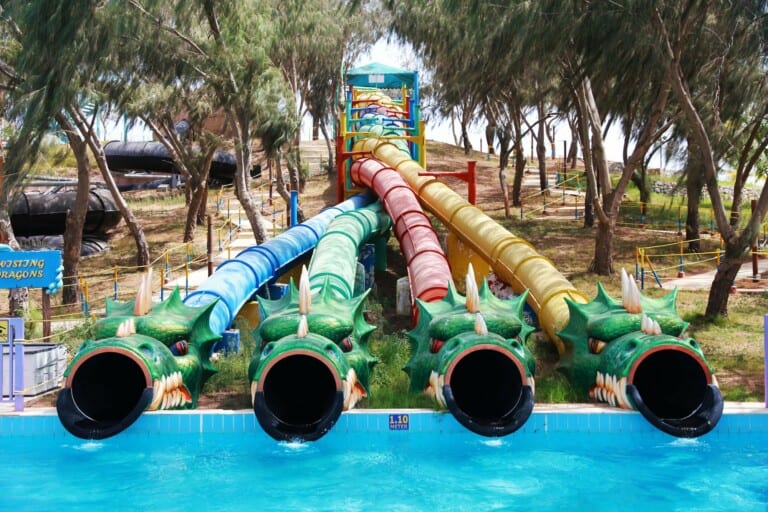 Inaugurated in June 1997, Dreamland Aqua Park is located in Umm Al Quwain, one of the seven emirates of the United Arab Emirates. It is the largest water park in the region, boasting more than 250,000 square metres of land.

The park, which is number 11 on our list of the top theme parks in the Middle East, includes 15 water-based slides and attractions, as well as camping facilities and cabanas. It also features a mini zoo, and has several F&B outlets. 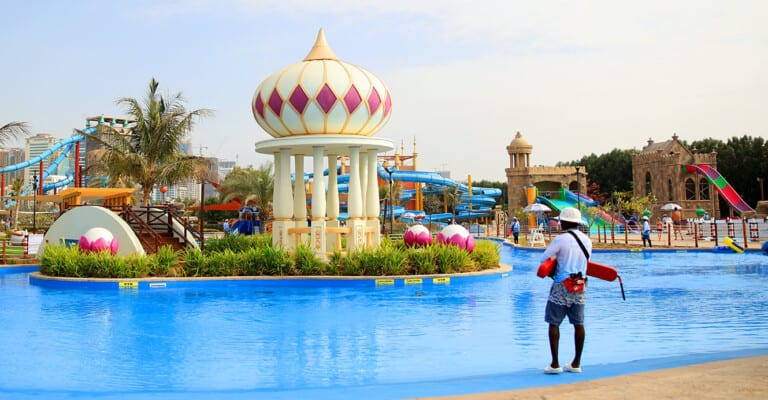 Al Montazah Parks in Sharjah, UAE covers an area of more than 126,000 square metres. It consists of two parks, a theme park called Island of Legends and a water park called Pearls Kingdom.

The latter is home to more than 25 thrilling rides and attractions, including a wave pool and slide tower. Island of Legends takes visitors on a journey through nine nations. Formerly the Al Jazeera Park, Al Montazah reopened in 2018 following extensive renovations.

“We are certain that Al Montazah Parks in its new avatar will redefine leisure and entertainment for the entire family,” Khalid Al Qaseer, manager of Al Montazah Parks, said in advance of the launch. “The destination is poised to be one of the most thrilling and fun-filled escapes not just in Sharjah but in the UAE.” 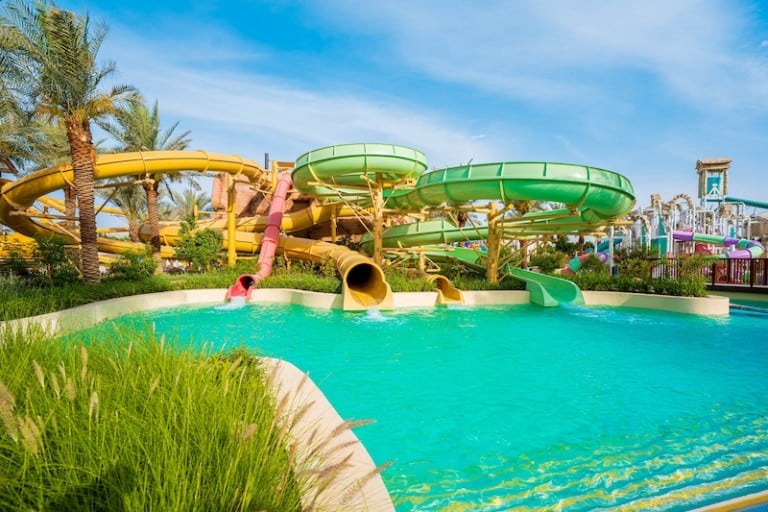 Next on the list of the top theme parks in the Middle East is Saraya Aqaba Waterpark, which opened in July this year as Aqaba’s first world-class water park and the largest water park in Jordan. The attraction features more than 25 rides, slides and experiences across more than 28,500 square metres.

“Eagle Hills is committed to delivering a truly world-class attraction to provide a new entertainment option for both the residents of Aqaba and its visitors,” said Abdallah Al Fraihat, executive director of Eagle Hills Jordan. “Saraya Aqaba Waterpark aims to rejuvenate local and family-friendly tourism in Aqaba, Jordan and for us to realize this ambitious goal we need to partner with capable and experienced operator.” 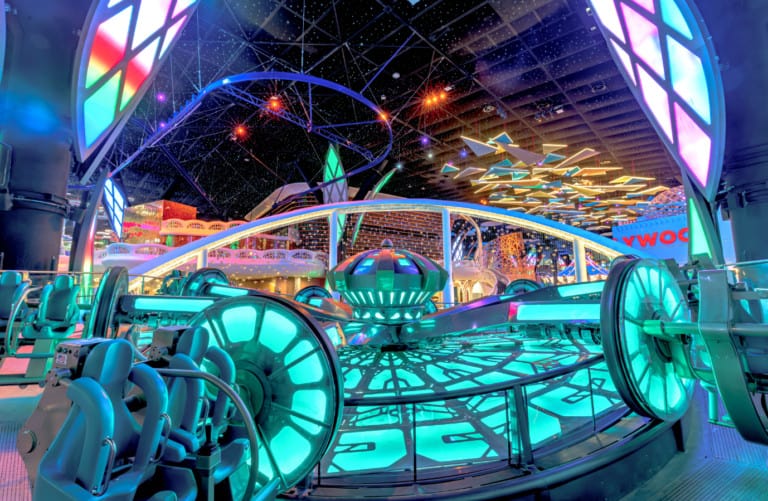 Quest offers more than 30 rides and attractions, from thrill rides to simulators and VR experiences. EpiQ Coaster is the world’s tallest indoor roller coaster, and Magma Blast is the tallest indoor drop tower ride in the world.

Quest is divided into three time dimensions – Oryxville, City of Imagination, and Gravity. It features a handful of themed F&B outlets, including Planet Hollywood Doha. In addition, Quest includes a 3D flying theatre attraction called Wings of Destiny and a 3D motion simulator called Legend of the Golden Oryx. It also has a spinning swing ride (Gravity Swing), the Jumpin’ Star mini drop tower, and the Time Travel thrill ride. 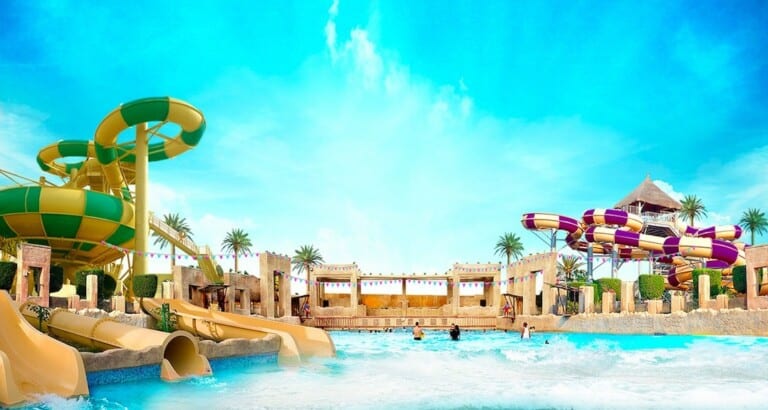 The final entry on our list of the top theme parks in the Middle East is The Lost Paradise of Dilmun, Bahrain’s biggest water park, set in 77,000 square metres of desert oasis.

Opened in 2007, the park has welcomed more than two million visitors. It contains more than 20 slides and attractions, including a lazy river, wave pool and raft ride. relaxing pools and spas are also available at The Lost Paradise of Dilmun, which is inspired by Bahrain’s ancient history.